The very first 2008 Hummer H3 Alpha has hit the ground in Dallas, TX – a pretty exiting site since they weren’t expected until several months from now! When we first saw the H3 Alpha roll up, we didn’t even notice the brand new color graphite metallic, which is very similar to the slate blue color that was discontinued in the 08 Hummer H3 models. The biggest exterior difference is the new front bumper, which is a light silver color. Hummer changed the design of the H3 front bumper to meet certain safety standards for frontal collisions. Right above the metal bumper, we noticed a newly designed mini grille. The new mini grille is designed to have more airflow to the engine area for cooling purposes. On a side note, the mini-grille lights are not compatible with the Alpha, due to them restricting airflow. The badge on the rear is identical to the Alpha badge used on the 2006 Hummer H1, and is the last of the exterior changes.

After checking out the outside – we had to get behind the wheel and see what the Hummer H3 Alpha model’s V8 could do. The difference came as soon as we started the engine, when the sound was noticeably different (at least to someone who cranks up the I5 every morning!). We’re hoping that Hummer’s performance H3 exhaust is compatible or they come out with one soon – since that would be the first powerful growl we’ve heard out of an H3. Ever! The other noticeable changes upon entry were the Alpha badge on the steering wheel, and the Alpha embroidered headrests.

Just maneuvering around the parking lot before we hit the street, we could already tell there was a lot more power in the low end, and the throttle was much more responsive. When we pulled onto the road, we let ‘er have it. Surprisingly, first gear felt a lot like the inline 5 Hummer H3, minus the extreme engine straining noise! Don’t get me wrong, you could again tell a difference in the low end, but it was nothing to write home about. When second gear hit you could again feel a difference in the low end, but much more dramatic. It was nice to see the Hummer H3 at a passing speed actually have some get-up-and-go!

At the end of the day, you’re still not going to win any speed races off the line (unless you’re racing a standard H3 😉 ) but the change is very noticeable when you need it the most – at passing speeds.

NOTE: We did add on some steps, rails, gas door, and roof marker lamps that aren’t on the factory sticker price. 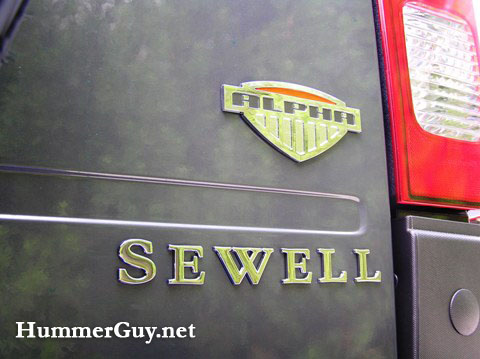