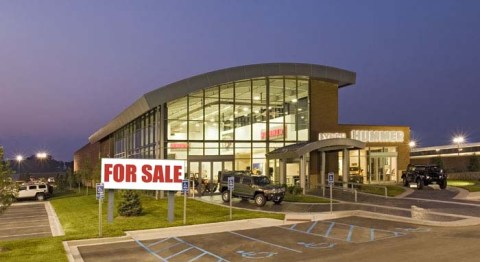 It was only a matter of time before Jim Lynch, owner of Lynch HUMMER in Missouri, sold his massive $7.5 million facility. Lynch first put the building up for sale in early 2009, and the latest asking price was $4.95 million before it was sold to an undisclosed buyer.

Lynch HUMMER was the very first dedicated HUMMER dealership in the nation, and for years in the 1990s, it was the largest volume dealer in the country. Once the H2s and H3s entered into the HUMMER lineup in 2002 and 2005 (Before you leave comments – I’m talking availability – not model year), stores in major metropolitan areas may have surpassed Lynch’s volume, but they remained a powerhouse in the H1 market – probably selling more than any other dealership in the nation. It was their dedication to the brand and its owners that drew people from all over the country to not only own a HUMMER, but a Lynch HUMMER.

When HUMMER was facing its demise, Jim Lynch introduced another product into the dealership – firearms. Lynch even launched a new branding website, gunsandhummers.com, which appears to still be running at 100%.

As part of the new offerings, Lynch planned to build a shooting range on the back piece of the dealership property, and focus on online accessory sales both for HUMMERS and adventure sports.

According to Lynch’s website, they are unable to use the “Lynch HUMMER” name since they no longer have any ties to General Motors, who still owns all rights to the HUMMER brand – but Lynch still operates a certified AM General Service facility under their new identity, Adventure Accessories.